Map 247 features every country’s most popular beer. The map was created by Vinepair. They don’t share their sources but I have to assume they did exhaustive research into a subject that a lot of people care much about (and their website sells alcohol so I think they know a bit about the subject). I do not drink alcohol myself but I know it’s somewhat popular with a wide variety of people. Okay fine, beer is immensely popular. Americans alone purchased 6.7 million gallons of beer in 2007 and I have to imagine that figure has only increased in recent years.

America’s favorite beer is Bud Light. Just to the North, Canada’s choice is regular Budweiser. In Brazil they prefer Skol while Mexico prefers Corona. The smaller the country the smaller the beer logo but this map is still a good, quick read. I don’t recognize most of these brands but hopefully the beer-drinkers among us will be more successful. What brands do you recognize? How many have you tried? What was your favorite?

Map 248 demonstrates something that could be caused by excessive beer purchases; debt! This map was produced by something called the Urban Institute using “2016 data derived from a random sample of de-identified, consumer-level records from a major credit bureau, as well as estimates from summary tables of the US Census Bureau’s American Community Survey (2015 or 2011–15) [Urban Institute]. The interactive map lets viewers analyze debt at the national level (pictured), by state, and by county. 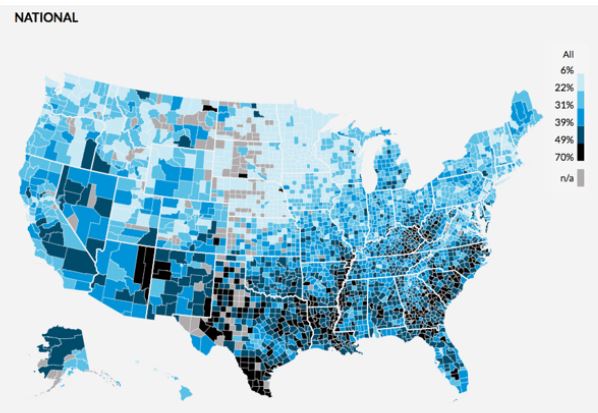 From this map it is clear that debt is a thing with which much of the country is dealing. Roughly one-third of American households are currently in debt; a total dollar amount of $13 trillion as of the second quarter of 2017. This dollar amount is not evenly spread throughout the country with large concentrations of debt-burden in the South. There are many counties in Texas, Louisiana, Florida, Arkansas, Oklahoma, Georgia, the Carolinas, Kentucky, and West Virginia where 70% of the population has debt. The Northern states are not nearly as indebted as their Southern neighbors with the least affected state being Minnesota. That is how I found this map, actually. A gentleman named Josh that I used to work with at Valleyfair Amusement Park in Shakopee, MN sent it to me because he knows I love maps. He remarked that it was yet another map that makes our home state of Minnesota look great. The Gopher State doesn’t look the best in every single map based on various statistics that I share in this series… but most of them do! If you’ve never visited Minnesota I would highly recommend checking it out. You may even discover that you want to move here based on our seasonal weather (not currently in a season where that’s likely), strong state economy, friendly people, and beautiful scenery.

This site uses Akismet to reduce spam. Learn how your comment data is processed.